Basic features out of the box 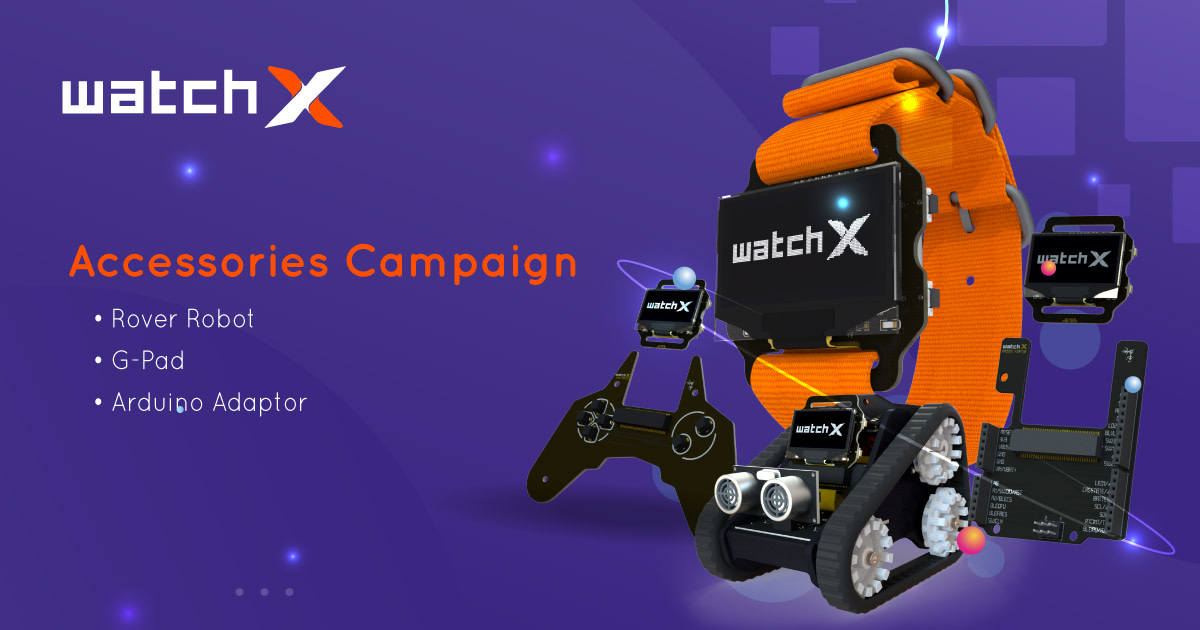 watchX & Accessories: Tools for Next Generation

Build your own smartwatch, learn to code. Expand the capabilities with the accessories. | Check out 'watchX & Accessories: Tools for Next Generation' on Indiegogo.

Hi, I am thinking about to support you at Indiegogo. But there I found no way to ask you a question about the stuff befor backing, a feature I like at Kickstarter a lot. So via some steps more I found this community and here are my questions: have the watchX for €78 a housing and which features does the watch have out of the box beyond displaying the time and the stopwatch ? Reason is that I am thinking of giving the stuff as a gift to a boy who has no skills in programming. And I think it is a better motivated start into the codere career if my present is not stupid or dead when he has assembled it. So for examples will the watch work as a step counter?

There are several firmwares on here that you can download. My firmware has a clock, alarm, can control music over Bluetooth and I am working on Bluetooth notifications. There are other firmwares on here with different features. There is also one provided by WatchX but it is not really maintained as it is a port of nWatch.

It is very easy to make firmwares using scratch which is drag and drop.

When I got mine it had nothing on it but that is kind of the point really as you have to do something to make it work and then learn in the process.

You will get a fully functional smartwatch which you can code with Scratch & Arduino.

@ NucholasAngle and @ scilsal, thanks to you both for your answers and if the watch would be for me I would buy them now. But the boy the watch is for only had ask me for a fitness tracker. Looking for this present I found the Indiegogo campagne for the WatchX and I like the vision that the boy can learn a lot more by getting a WatchX. But I don`t know if this is a good birthday surprise when the watch have not some out of the box features he had asked for. So the question is if the watch have some software installed to use the watch direct as a fitness tracker. And whats about the case of the watch? Is this included

Thanks and best regards

To be honest, even if watchX is a perfect gift for a boy that you want to learn programming, it’s not the best gift in this situation. If you want to have some time programming with him then you can go. But if he only needs a fitness tracker you should find something else (or both

Dear francois, thanks for your recommendation and I think to buy a dump activation tracker for the birthday and the WatchX for the next christmas

. But I have the two last questions: what basic programm functions the watch is ready to do after beeing assembled and without individual codeing / what standby time the battery have about average.

Our community members provided you the best information possible:) What is left to me is the sharing the below video with you:

This is from a summer coding camp in USA. These kids are all age 9+ learn coding. It’s very thoughtful of you to encourage him to coding. However if all he wants is a fitness tracker then watchX may not be an ideal choice:)

I’ll start by the beginning : do you know what is an arduino or a microcontroler ?

An arduino is a microcontroler, so let say a small computer. On paper, if you are not aware about what it is, you can be afraid of. But practically it’s quite easy to take in hand and here is how it works :

There are some GPIO : pins that you will use as Output or Input. That means for example that if you plug a sensor on this pin and you use it as input, you’ll be able to read the signal coming from the sensor. Or as output, you can for example use a led and send a signal to the led to make it glow as you want.
So for the hardware, it’s already enough to know to understand how it works.

For the software now : you will use what we call an IDE, it’s the place where you will program and write the code of the computer. For example : “if the sensor clock say that it’s night time, then light the led”. This is something you will be able to do with an arduino and so with the watchX.
There are several way to program and some are very intuives such as block programing allowed by watchx, you don’t have to need experiment, you’ll find tutorials available from 10 years old boys and girls.

Back to the watchX right now : as I said, it’s an arduino but what the team have created is an arduino mounted on a support that you can use as a watch and with some sensors already mounted on the GPIO. You have 3 buttons, 2 leds, an accelerometer that will allow you to feel that you move, a compas to tell you where you are moving, temperature measurement, bluetooth module to send and receive some data’s etc.

When you will open the box, there is no program in the computer (only a welcome text). You will have to download the arduino IDE software or mblock, copy paste a program that is available here and some libraries to use the sensors. Then you will plug your watch to your computer and send the code from the computer to the watch.

This needs a minimum of soft skill in computer : be able to download a free software, download and copy paste the files with libraries at the right place (a library is a special code that you don’t have to program and already exist for doing something. For example, the accelerometer will send some complexe signal but with the right library, you don’t need to understand the signal, the code already do it and you just have to use easy functions such as “give me the Z acceleration (vertical)”.

So after this long explanation here are the quick answer to your first question : there is non basic program inside the watch when you open the box, but after one or two evening of learning, you will be able to put ANY program as you want, depending on what you want to do (a lot are already existing and you will be able to change them as you want. For example put on the screen : welcome Timo when the watch is starting).

The second question is more tricky, it will depend on the program and how you optimize it, if you use everything every time, it will be a few hours working. If you optimize and only show time a few days.

Don’t hesitate to ask anything else. It’s a very good experiment that can allow you to learn a lot of things.

Dear francois, thank you for your time, patience and explanation - this alone is worth supporting the campaign. Your post clears up a lot I have not found about the WatchX at other sources. And yes I know what an arduino or a microcontroler is. I have a commericial production company and for example we are using arduino solutions to control time lapse or to remote cameras wireless. So my questions have not a technical then the pedagogical background at which step of the assemble challenge of the smart watch a child get íts first reward/acknowledgment and is it possible to test the main functions befor starting to coding something.
Thanks again and thanks to mtulu for the video.